Whether it’s life, a game of poker or photography, all of them are characterized by up’s and down’s. The trick is to hang onto the up’s and in that sense, this week has definitely been good to us.

We sold our first canvas print, making Sietske’s Daydreaming lioness our best selling shot, with the counter standing at 1. Meanwhile, my ‘So tired!’ shot got highly commended in the Wild Eye February Nature Photography Competition, being the first time that one of my images earns recognition in this kind of venture. Please take a look here for the announcement of the winners.

Now don’t worry, I’m not planning to get cocky about this (I won’t change my Twitter profile into Award winning photographer just yet ;-)), yet I must admit it is extremely motivating to have your image selected amongst over 350 great entries.

A few more words on the picture entitled: So tired!

This shot was taken on the morning of December 31st. We had decided to sleep in, in order to make it till the new year in the evening, yet I got woken up by a baboon that decided to check out our roof tent and I was forced to join him for a morning leak. At that moment, I saw a vervet monkey family moving in the bushes along the river bank. I got my camera out and decided to go halfway down the river bank, with the family slowly moving towards me, hoping they would move on and pass in between my position and the river, much in the same way as they had passed in the other direction the evening before. Most animals being creatures of habit, they did. The shot I wanted to get was a youngster portrait, with backlit ears against a clear background. Yet in the process this obviously still tired little one gave me some great laughs. It all happened in the bushes to my side, hence the busy background (as the judges rightfully pointed out). Lesson learned: always keep your background in mind, yet don’t let it prevent you from taking the shot. In this case, I could not reposition, since I would’ve scared off the entire family and I would have missed the backlit ears shot (I’ll share that one later on).  In terms of post processing, I decided to convert ‘So tired!’ to black and white to enhance the mood of the picture, I dodged the background and burned Gollum or Yoda slightly (of which the youngster reminds some people, personally I had not thought of Yoda, yet give this one a few more years and a cloak, … ;-)).

Coming back to the fact of not getting cocky, the more I think about it, I feel that that is one of the great characteristics you need as a photographer: it are the people who take their craft serious without taking themselves too serious who tend to make it that one step further! Do you recognize that? Are you one of them?

Most of all, enjoy what you are doing and take it from there.

Have a great week,

After a slow start in posting pictures and stories it is now time to get up to speed. We just returned to Nairobi after a 5 week long home leave in Belgium, The Netherlands and Norway (honeymoon). Later on, I will post some pictures from Norway, being a wilderness in its own right.

In my last post, I mentioned Gerry’s role in my journey. At this time, I go back further in time, at the real start of my photographic journey, in which my uncle played a huge role, by giving me his old Praktica camera, including macro extension tubes. It was with that camera from before the digital era that I started my journey, a huge present, introducing me to shutter times and the lot.

After some time, when I left to Africa for the first time, I carried a non digital Canon Eos with a 75-300 and shot slides (I’ll try to find time to digitalize and share some of them during my next home leave). Just after returning from my first trip to the Mara, this camera got stolen from my room, including some cheetah shots I’m still chasing till now: the eyes image filling when it came scratching itself against the van. After this, I moved to a digital EOS 300D (which on its turn got stolen from the car, … mfh) and then onto a 350D. It is with this last camera and a 75-300 f4-5.6 that most of my initial pictures on this site have been taken. Basic equipment that has given me lots of pleasure. It’s only during the last months that I decided to spend some extra money, both on a new camera and more importantly, on some second hand glass. More about that, the decision making process and my reasoning in the next post.

I have to rush now, leaving you with 2 pictures from the non digital age I have lying around the house (pictures of pictures I like to share with you, not because of their fantastic quality, yet just because I want to share them).

The first one is from the Samburu game reserve in Kenya, showing doum palms whose dichotomous

shape provided me with some nice opportunities to take advantage of the sepia film I had put in my camera.

The second one goes with a story. Arriving at the fig tree campsite along Lake Baringo, I noticed plenty of flamingo feathers and remains across the site, leaving me with the question which animal created this kind of flamingo havoc. I was soon to find out. In an attempt to get a frame filling shot of flamingoes, I was approaching the water when all of the sudden I heard something crashing through the bushes right behind me. At first I thought my end had come to the fangs of a predator, yet instead, I saw a large baboon running past me and into the flock of flamingoes. Before they (and myself) realized what happened the baboon had taken one by the throat and dragged it onto the land. All of this happened in seconds and I only managed to get a shot of the action by rolling on my back and panning along as he rushed back into the bushes. Remember, I was a poor student at the time and shooting slides, so no x frames per second for me at the time. The result, although unsharp throughout remains one of my favorite shots since it recreates the action I witnessed and I like the pink in an otherwise quite monochrome shot. 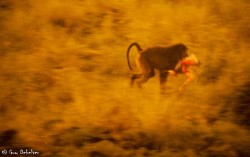