As some of you may be aware, my photo “The Explosion!” recently won first place in the nature category and was also chosen as the Grand Prize winner of the 2012 National Geographic Photo Contest. I am at a loss to find one single adjective that most accurately sums up the amount of joy that I felt upon receiving this news, but I can say that underlying all those wonderful emotions lay a feeling of complete surprise; certainly I dreamed a few times of my picture being awarded some sort of recognition and even toyed with the thought of what it might feel like to actually win, but I never seriously considered anything more than the possibility of perhaps an honorary mention.

As it happens, I don’t generally look to enter my photos into contests, but not long before National Geographic opened the doors to their last one, I was looking through an old issue of BBC Wildlife Magazine (actually from February 2008; my name is Ashley, I like to hold onto things!) and was drawn once again to an article titled “How To Win: An Insider’s Guide” written by the Chairman of The Judges, Mark Carwardine. The article was promoting the opening of the 2008 Wildlife Photographer of the Year competition, and made for a very interesting read. For all that the author wrote though, one particular point he made struck more of a chord than everything else put together: “There is one key ingredient – originality. The judges are looking for something that stops them in their tracks.” 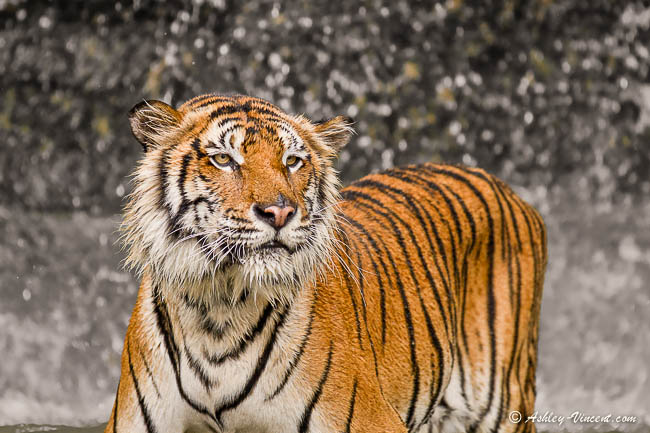 Whether coming across that old magazine may be considered kismet, serendipity, or perhaps even providence, in retrospect I feel this was no mere chance, as Mr. Carwardine’s words sprung to mind upon seeing the announcement of National Geographic’s 2012 contest, and a mental picture of “The Explosion!” immediately followed that. I like to think I have more than a few striking images in my portfolio, but if there is one with stand out potential for “stopping people in their tracks” more than any other then this would have to be it, which is what spurred me on to taking a chance and entering it into the contest! 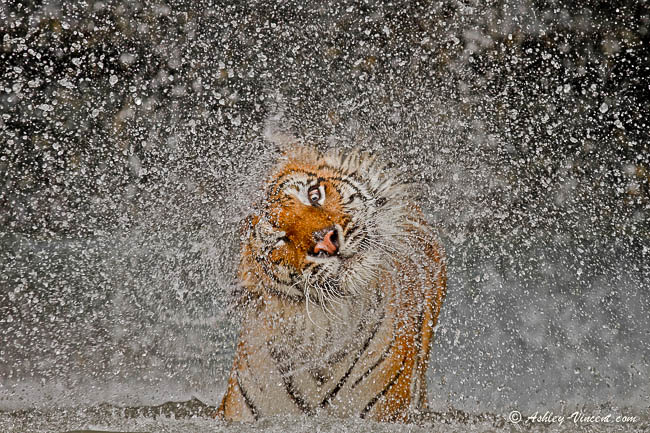 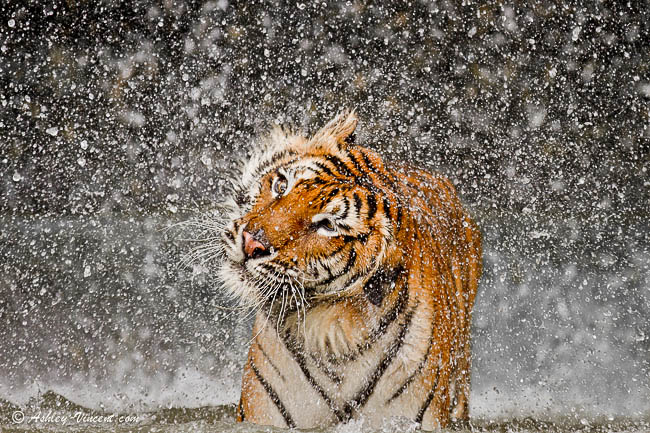 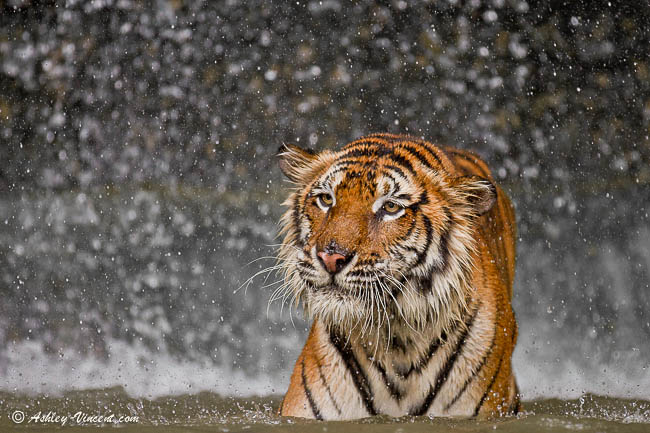 Sadly, a very small minority of people were not exactly thrilled with National Geographic’s choice of “The Explosion!” as the winner of the nature category and, thereby, the overall winner of the contest, for the simple reason that they feel a captive animal should not be considered part of nature. Of course it has been suggested by more than a few that those indigent parties are motivated primarily by feelings of jealousy and I have been told not to pay attention to any such thoughts that have been publicly aired, yet I have to admit it is a little irritating to think that already now, and perhaps for years to come, whenever anyone searches something like “Nat Geo photo contest controversies”, pages debating my picture will come up; even though no one has accused me of deception, by simple virtue of the fact that a few people have, to my mind, needlessly thrown up a question mark over the validity of “The Explosion!” winning a nature photo contest, the win will always be mildly tainted.

In at least one regard I am like anyone else that is not employed by National Geographic and has never been invited to sit in on board or director’s meetings where matters such as what National Geographic is really all about and the directions they choose to head in, so I cannot lay claim to understanding their motivations behind anything they do. As a hopeful entrant, the only logical step I could make to understand the parameters of this contest was to read and digest their terms and conditions, and I did. Which is why to begin with I couldn’t comprehend how anyone would have anything negative to say about “The Explosion!” being chosen as the winner, as most anyone that read the terms and conditions, with an unbiased mind, would surely have to agree “The Explosion!” adheres to all the rules laid out.

Then it dawned on me: This great disappointment some people experienced is based upon their misconception of what National Geographic is all about; they love reading articles and seeing documentaries featuring explorers who brave the elements and only after extreme hardships and many years come up with something no one has ever seen or heard of before. As it happens, having been an avid fan of National Geographic for many years myself, I love this sort of coverage too … but I also greatly appreciate National Geographic’s diversity when it comes to featuring the work of Joel Sartore, for example, who for me has always been an enormous source of inspiration and evidently is just as content to capture compelling photos of animals in captivity as those he may come across in the wild.

In fact, Mr. Sartore is one of my heroes, and when I grow up I want to be just like him! Seriously folks, those that have gotten to know me at least a little will readily tell you how passionate I am not just about capturing images that make you go “Wow!” but in my hope to make a difference; to have the viewer feel a connection with the subject that will hopefully compel at least a few to want to help in whatever way they can to protect our natural heritage; this is my greatest dream, this is my principal aim. While I may be way behind Mr. Sartore when it comes to experience and achievements toward this end, he is one my most influential sources of inspiration, and in much the same way I was not afraid to pursue my dreams of becoming a professional wildlife photographer, despite pretty much everyone I knew at the very least offering doubtful looks when I told them, I continue to dream and actively work toward making a difference to some degree the way that Mr. Sartore does.

For those of you who are perhaps unfamiliar with Joel Sartore, his marvelous work, and his ongoing endeavors to make a difference, I think you will find this 15-minute video interesting and highly enlightening.

Explaining in part why he regards pets, domestic, and captive animals as all being “wildlife” and the importance photography of such subjects plays in his work, he asks this question, “How do we talk to people in an ever-distracted world with no time for anything except for what they see on their cell phone at a stop light? That’s the news they’re gonna’ get today on the way into work.”

I guess the point I am trying to make is, contrary to the so-called “purist” mentality that pictures of captive subjects have little or no value, or at least are in some way inferior to photographs of animals captured in their natural habits, with the benefit of a broader perspective this is not the case at all, and I feel those that attempt to discount photographs of captive animals are doing a great disservice, not only inasmuch as discouraging budding photographers who may not have the time or resources to travel to exotic locations, but in potentially snuffing out hopes and aspirations of people that, with more encouragement and inspiration, could possibly go onto follow in the steps of someone like just like Joel Sartore. 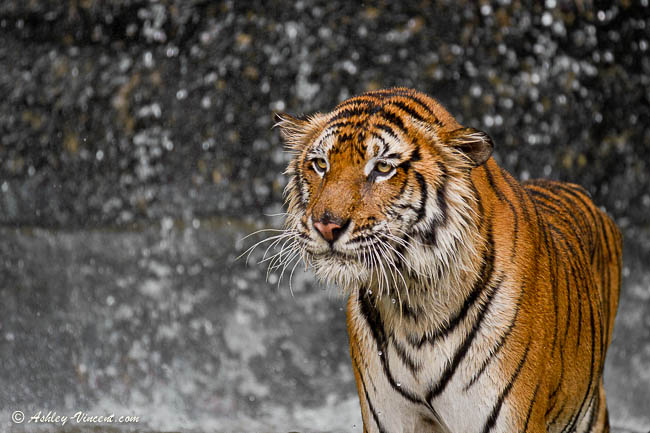 It’s possible I may never succeed in my endeavors the way that Mr. Sartore has, but I’m not attempting to outdo his work; my aim is to pick up his lead and, in my own way, contribute as much as I can. Not much more than two years ago all I really had was a dream, a burning desire to achieve that dream, a plan of action, and bundles of enthusiasm, oh and a camera as well! What I’m trying to say is, if anyone out there is still reading all this and thinking, “Yeah, it’s OK for you, you’ve just won that Nat Geo thingy … ” for me this isn’t about winning a photo contest, but what I may be able to do now with the recognition I’ve gained to help me accomplish more of my primary goals, which are to help bring about an even greater awareness of Mother Nature’s wonderful gifts, raise levels of empathy to the point that at least a few are inspired to make a difference that will help protect and conserve our planet’s animal populations, and to further inspire anyone who shares my passion for wildlife photography and sees a value in doing likewise.

In summary, dare to dream, pay no attention to discouraging words, be inspired by those that are showing you a way, and take steps on the path toward making your dreams a reality. 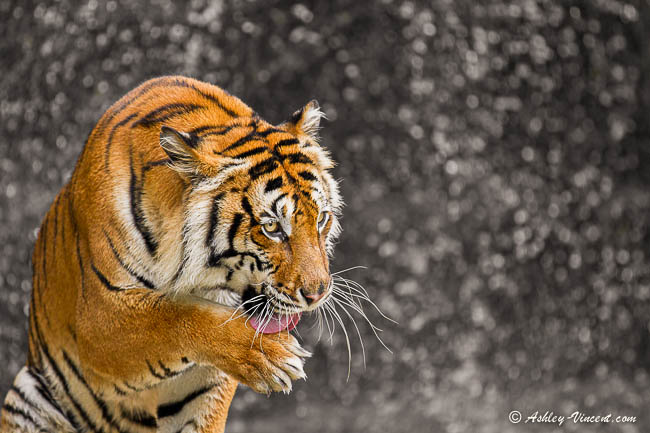 Thank you for your time and wishing you all the positive things you could wish for!

You can find more of Ashley’s work on 500px, his webiste and FaceBook page.

Some of you may have followed the recent discussion concerning Ashley Vincent’s picture ‘The Explosion’ snatching the Nature category as well as the grand prize in the 2012 National Geographic photo contest. The entire discussion revolves around the captive vs wild discussion to which I happen to have a very clear opinion. The 2010 Wildlife Photographer of the Year wolf shot was a hoax, since the photographer failed to mention the shot was picturing a captive animal, while at the same time the rules don’t allow for shots of captive animals. In that sense there is no comparison to Ashley’s work: the rules allow for pictures of captive animals to be submitted and his caption tells the full story, so I honnestly don’t see what people are nagging about! As long as you don’t start pretending captive animals were actually wild and as long as you don’t refrain from mentioning the truth, there is absolutely no issue in my book! And for those of you who feel NatGeo should only focus on wild animals, they should enter into a discussion with National Geographic instead of running this discussion on the back of Ashley’s picture (it was after all not him defining the rules of the competition).

Whilst we’re at it, check out the latest Top 25 Photographs from the Wilderness #8, amongst which you will also find a color version of my sleepy vervet monkey shot.

All this being said, I can only say that I admire Ashley’s work (check out his 500px portfolio here) and that I am stoked he agreed to share his personal thoughts in a guest blog on this page. Till then, I invite the laptop critics to go out to a zoo and get the shots Ashley is envisioning and creating and I leave you with a shot of an elephant orphan at the David Sheldrick Wildlife Trust. To avoid any confusion, it considers a rescued elephant, which is now being taken care off at the Trust and which will be reinserted into the wild in the Tsavo National Park in Kenya.