As part of my ‘let’s focus on what matters’, I finally decided to calibrate my monitor, and my goodness, was I impressed as per the ugly blueish hue my non calibrated monitor had.

I chose a simple Spyder 4 Express, to which the working instructions are clear:

A few minutes later you’ll be watching your calibrated monitor, it doesn’t get much easier than this. 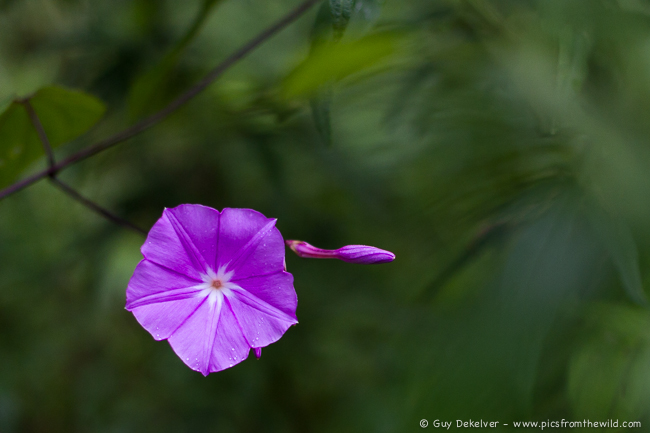 I remember reading once that getting into post processing doesn’t make much sense if you’re doing all your work on a non-calibrated monitor and I can assure you that I’m no longer going to doubt that statement. So, to cut my sermon short, instead of investing in that next camera or that other lens, do yourself a favor and get your monitor calibrated.

I have always felt that the best nature photographs are those that capture the viewers’ attention and hold it because they are interested in the subject and the story behind the frame. When the photographer manages to show such a scene in an artistic way, the photo comes alive.

Regardless of artistic merit though, I take great pleasure from those photographs of mine were someone asks: “So what happened next?” This happens quite often and even more so when you display your work on the internet in forums where viewers participate by way of comments.

Guy asked me to do a guest post for this blog after a photograph of mine recently caused us both to smile at the reaction it generated on a particular photography forum. It illustrates, I think, the importance of context when telling a photographic story.

The picture below was made in the Kruger national park and shows what seems to be a rather angry and aggressive male lion with its teeth barred and an icy stare at the camera. The image was viewed almost nine thousand times on this particular site and more than 200 people commented on it. 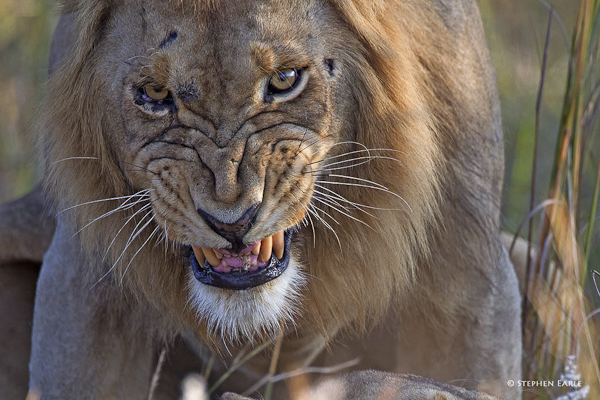 Here are some of the comments:

“OMG Stephen. Are you still alive? 🙂 What a fantastic picture! I do like it!”

“Excellent capture..I cannot imagine what the damage would be if he caught you..Scary stuff! Looks damn mean..”

“WOW!! I can imagine that other people/creatures who got this look, didn’t have the chance to tell afterwards. Amazing!”

“Stephen, this is crazy, hope you weren’t to close and this look wasn’t directed towards you. :)”

“Yeah, that’s an attention-getter, all right. If it were me, I’d be thinking that 700mm might not be quite enough!”

It’s clear that a lot of these people obviously thought that this lion was in an extremely aggressive mood and that somehow that anger was directed at me. Some, it seems, even thought that my life could have been in danger as I’m sure in their minds eye they saw a crazy photographer lying about somewhere in the bush pointing his lens at an enraged cat.

This is an illusion of course. The truth is much less dramatic.

I was on a Sunday drive through the park in my cozy, air-conditioned 4×4 vehicle when we came across two mating lions. In the vehicle with me was my two kids, aged five and six. It was midday when we first saw them so I decided to drive around some more in search of other opportunities and to return later when the light was better.  Mating lions are pretty predictable and usually don’t move far once they’ve found a good spot. They also mate several times at regular intervals over the course of a couple of days. So, it was no surprise when we returned a few hours later to find them sleeping in the same spot. There was another vehicle at the sighting and I found out that they mated about twenty minutes before we arrived. Knowing that another mating was imminent I thought it worthwhile to stick around for some shots.

Anyone who has seen lions mating knows that the process last less than a minute and that the female displays aggressively towards the male right at the end. The male often returns this aggressive display.  This behavior is what I wanted to photograph. The pair was lying in some thick vegetation about fifteen meters from the road and I realized that a wider shot showing the whole scene would probably not work. To me there was only one shot that might work and that was a close-up of the lion’s faces right at the moment of their “aggression” at the end of the mating process.

Unfortunately, once they decided to mate they moved to a position from where a photograph was impossible as it happened behind a small tree and I couldn’t reposition my vehicle in time. I decided to wait for the next mating and found a spot from where the only possible shot through the intruding grass could be made, if they decided to mate in the exact spot I predicted it would happen. I set myself up for a close-up shot of what I hoped would be the heads of the female and the male, in one frame, teeth barred and snarling as the mating ended.

We then waited for an hour and sixteen minutes and during that time the most dangerous part of the events occurred. Anyone who has tried to keep two kids occupied in a vehicle while their father waits for over an hour for a photograph would immediately agree with me. I blocked or defused at least four fights, cleaned at least two cool drink spills and averted four or more attempts by my son to download a new game onto my iPad from the app-store.

Luckily the lions cooperated perfectly and moved into the exact spot I predicted when they finally mated and I managed to get a few frames. Naturally, as things go in wildlife photography you seldom get everything you wish for and in this instance the female decided not to display aggressively at all. This meant that there was no frame where both their heads where close enough together for that tight interaction shot and while I tried to get both lions in the shot, I ended up cutting an ear or part of the head in most.

Somewhat disappointed, I reviewed the images later that night and came upon the frame above. The original full frame version is below. 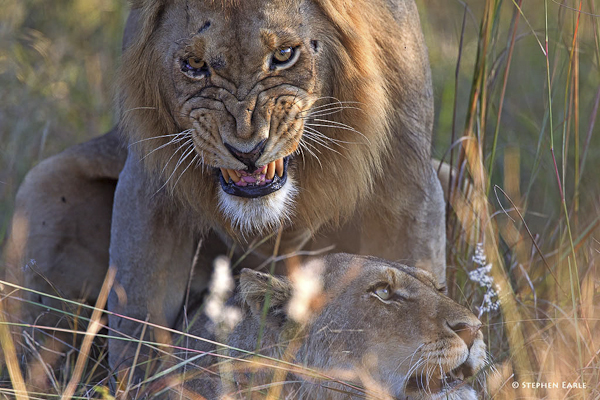 I liked (and still do) the full frame version but on reflection it became obvious how the story could be altered if I decided to crop the frame a little tighter, which I did. By removing the context all of a sudden the picture took on a whole different meaning and it is no wonder that viewers with little or no experience of these animals made the comments they did. The fact that I never described the circumstances around the pic obviously perpetuated the illusion.

Sure this is a wild lion captured in its natural environment. Yes, I would probably not have approached it on foot without at least some backup. Was I ever in danger or did my kids bat an eye-lid while this scene played itself out? No. Was it angry and in a killing mood? No, it was probably quite irritated however at having a lens in its face during such a passionate moment. Would it have had the same impact if the original context was displayed? Probably not.

If you are new to wildlife photography, there are a couple of things that one can learn from these events that may help you the next time you’re out there.